The Western Golf Association’s premier tournament, the BMW Championship, is still nearly two months away, but the WGA showed off the improvements coming for the third tournament of the PGA Tour’s FedEx Cup Playoffs

Tourney site Conway Farms, in Lake Forest, underwent an extensive renovation since hosting the event in 2013 and spectators — 130,000 are expected again – should have an improved experience. Cart paths have been widened throughout the course to improve foot traffic and seating has been improved dramatically for that big week when trophies (to say nothing of big prize money) is on the line.

The size of seating around the 18th green has been doubled and there’s also expanded viewing at Nos. 1, 2, 7, 9, 11 and 17. The Beer Garden, a popular attraction two years ago, will also be doubled in size. 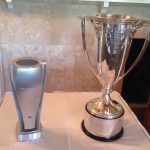 More than anything, though, the work done on the course has opened up vistas for better spectator viewing. Also improving the spectator experience is the establishment of an attendance limit. Vince Pellegrino, the WGA’s senior vice president, tournaments, said attendance will be limited to 27,000 per day. When the tourney was played at Conway two years ago the gallery topped 35,000 on Saturday.

The players will find a major change in the practice facility. It’s been enhanced with a 10,000 square foot putting green, a two-acres practice range and a new short game area. All 18 greens were re-grassed. several new tees were constructed and others re-shaped. New back tees resulted in the lengthening of Nos. 4 and 17.

Strategically, No. 16 – my favorite hole on the course – has two sod-wall bunkers now instead of three and they’ve been moved to the right. This, you’ll remember, was a key hole in 2013 because Jim Furyk made eagle there en route to shooting his record 59.


The tournament dates, Sept. 14-20, are a week later than they were in 2013 with players getting a week off in between the first two playoff events and the last two. The purse has increased slightly, to $8.25 million.

Pellegrino announced a new event for tournament week. The Evans Scholars Cup will be contested on Monday. It’ll feature teams from 28 clubs and their head professional. Otherwise the schedule is the same as in the past except for the starting times for the first two rounds. Play will begin at 11:30 a.m. on Thursday and Friday and 7:30 p.m. on Saturday and Sunday.