OLD HICKORY, Tenn. – It took eight tries, but the LPGA Legends Tour finally witnessed a breakthrough in its premier team event on Sunday.

The Legends’ U.S.-born players had won the ISPS Handa Cup six straight times and retained it last year after the matches ended in a 24-24 tie at Reunion Resort in Orlando, Fla. Now the cherished Cup is finally in the hands of the World team, consisting of Legends players who were born internationally. And they were in the mood to celebrate (see picture, below). 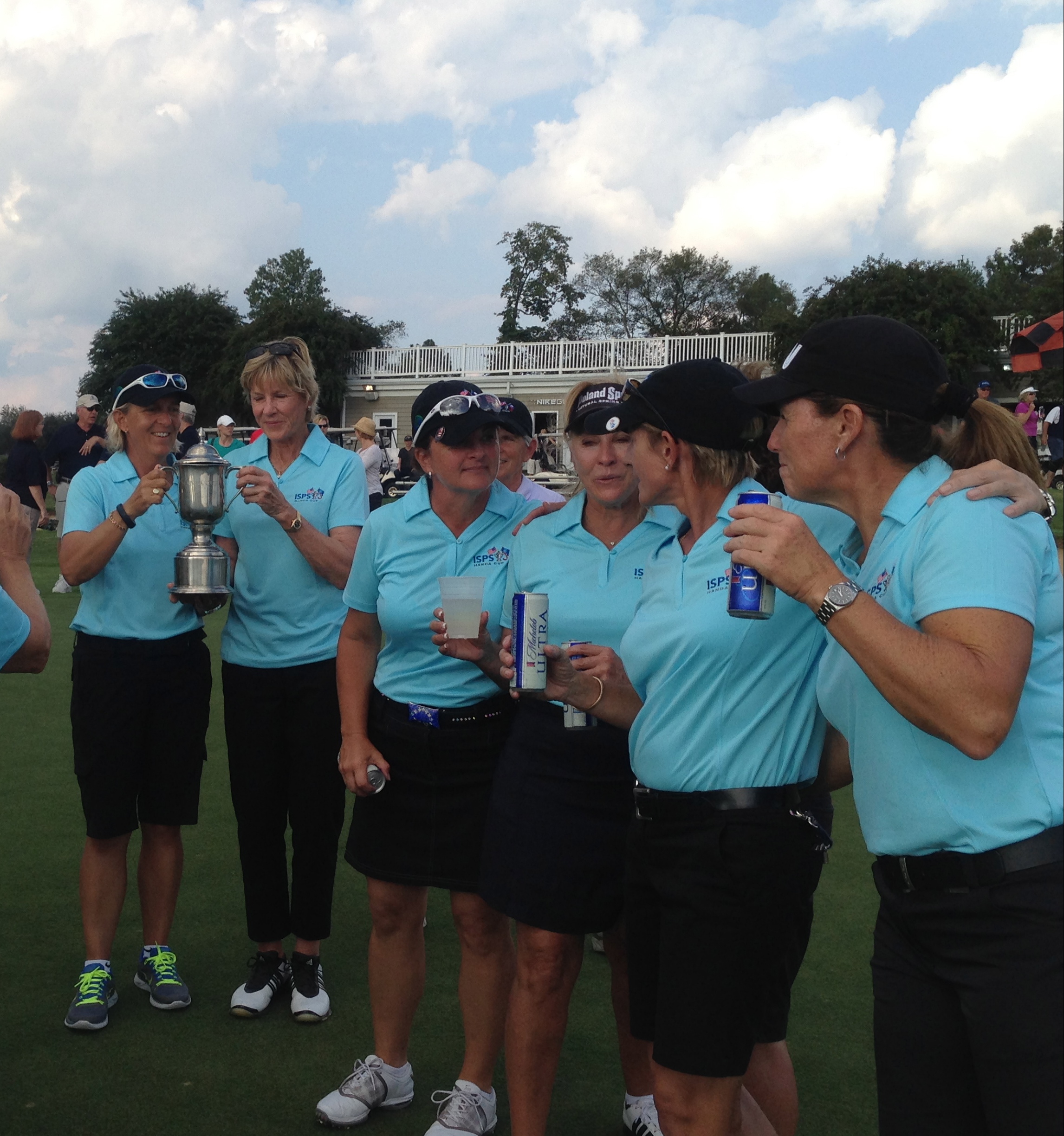 They took a 14-10 lead into Sunday’s 12 singles matches at Hermitage Golf Club on the outskirts of Nashville en route to a 27-21 victory. They even threatened to make this staging a runaway after Beth Daniel of the U.S. outlasted England’s Laura Davies in what turned out to be the best match of the day.

Daniel won the first match before the World team took charge. A repeat of last year’s tie was assured with five matches still on the course, but it took a 30-foot birdie putt by Australian Jan Stephenson in the next-to-the-last match of the day to assure the World team its long-awaited victory.

“It took a few years for the World team to practice and get better and better and better,’’ said captain Pia Nilsson of Sweden. “We were a team this week, and the passion was so strong. This is just going to make this competition even better, to grow in the future.’’

JoAnne Carner, the first U.S. captain to lose, took the defeat in stride.

“Sometimes you hate to lose, but the way the World team played this week I have no repercussions whatsoever,’’ she said. “They just outplayed us.’’

Nilsson declared Davies her first player out in singles for good reason. She was devastating in Saturday’s best ball and alternate shot matches, going 6-under-par and 5-under-par with partner Trish Johnson to win both. Carner countered with Daniel, who proved every bit up to Davies’ challenge.

Davies made birdies on the second, third and fourth holes but lost the lead at the turn, as Daniel played her front side in 4-under. She was 2-up, and 6-under for the day, going to No. 18 – a 334-yard par-4. The long-hitting Davies then drove the green, leaving her an eagle putt to potentially even the stroke play match.

“Laura would have carried that drive 300 yards,’’ marveled Daniel, “and that wasn’t even downwind.’’ The big drive came off a crosswind, uphill tee shot. Davies missed her eagle putt, finishing the match at 5-under. Daniel salvaged par for the win to complete the match that took only 3 hours 9 minutes.

“It was like a boxing match out there – really good golf shots and a lot of fun,’’ said Daniel. Though she had a 12-5-2 Handa Cup record prior to Sunday, Daniel doesn’t compete as much as Davies these days. Carner still wanted her out first for the U.S.

“I felt a lot of responsibility,’’ admitted Daniel. “Coming here, I didn’t feel my game was that good but I kind of found it on Saturday when I played really well. JoAnne had the confidence to put me out first. She just said `you’re playing awesome,’’ and I felt honored she picked me. I’m just happy to have found my game for two days. I’m always grateful when that happens.’’

The momentum from Daniel’s big win disappeared quickly, though. Rosie Jones lost her first Handa Cup match in five years, falling to Trish Johnson in the second match. Johnson was just as hot as Daniel, also going 6-under.

The tension started building after Mieko Nomura’s rout of Pat Bradley gave the World a 24-14 advantage, meaning one more point would seal the win. Never was the tension greater than when Nancy Scranton and Liselotte Neumann hit the 18th green.

Scranton hit a great approach to four feet and needed the birdie putt to win the match. She lipped it out. Then Neumann needed to hole a par putt from the same distance to clinch the Cup for the World team. She missed, too. That gave Scranton the win and Cindy Figg-Currier won the next match for the U.S. to make it 24-20.

The last two matches on the course were all even at that point, but Stephenson’s uphill, breaking putt on the 18th ended the suspense against Sherri Turner and Gail Graham and Betsy King tied in the meaningless final match. That left the U.S. squad (pictured above) a loser for the first time.

No site has been announced for next year’s Handa Cup, though Hermitage owner Mike Eller said “We love company…We hope we can do it again.’’

And the players certainly seemed receptive to returning to the course that hosted the LPGA’s Sara Lee Classic from 1988-2002. Next event on the Legends’ schedule also has a Handa connection. The ISPS Handa Open Championship will be held Nov. 8-10 at Innisbrook Resort near Tampa, Fla.