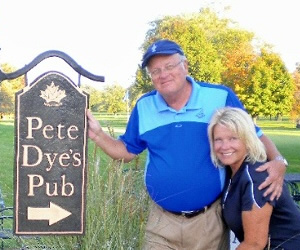 CARMEL, Ind. — No disrespect to Tom Fazio, Rees Jones, Robert Trent Jones, Jack Nicklaus or any of the other high-quality golf course architects putting their talents on display these days, but — for my money — one stands ahead of the others. Pete Dye is definitely the most innovative and probably the most prolific architects of our generation.

Last year, amidst limited fanfare, his boosters in Indiana announced the formation of the Pete Dye Golf Trail. It was basically an informational website (www.petedyegolftrail.com) then, but this project should turn into something significant for both Dye and golf generally in the Midwest.

This year the same seven participating courses will be on board, stay-and-play packages will be available and other incentives may be added as well. And the heart of all this golf activity is a good place in itself. The Indianapolis suburb of Carmel was selected as the No. 1 Best Place to Live by Money Magazine for cities with population between 50,000 and 300,000.

I wanted an early jump on the Trail, so I hit five courses in five days in the fall. One very unexpected plus was the fact that you don’t have to travel far to get from course to course in the heart of Trail country. From a hotel in this Indianapolis suburb I could get to five Dye courses with drives of 40 minutes or less.

Before getting into the Trail, consider its significance. Only the Robert Trent Jones Golf Trail, which has 11 courses in Alabama, is similar within the U.S. The Dye Trail doesn’t encompass many of his famous courses, but it does include his first 18-holer and his last one. The Trail is a great place to get a feel for all the good things Pete Dye has done in his brilliant architectural career.

Now well into his 80s, Dye has been designing courses all over the world for over 50 years. His best known courses — arguably, at least — are the Stadium course at TPC Sawgrass in Florida, the Stadium Course at PGA West in California, Whistling Straits and Blackwolf Run in Wisconsin, Crooked Stick in Indiana and the Ocean Course on Kiawah Island in South Carolina.

Working alone or occasionally with other architects — usually wife Alice or sons P.B. and Perry — Dye’s portfolio lists nearly 300 courses nation-wide. Many have won awards. Oddly only one, Ruffled Feathers in Lemont, is in the Chicago area. Dye worked with P.B. on that layout, which opened in 1991.

The Dye Trail, strongly supported by Indiana governor Mitch Daniels at its creation, is a journey through Dye’s architectural career. One of the seven courses was built for less than $1 million, another for $15 million. But all are good.

In a perfect world you should start the Dye Trail with a round at Maple Creek, which opened in 1961 under the name of Heather Hills. Dye had dabbled with a few other courses before this one, but this layout — created within the Indianapolis city limits with wife Alice — was his first 18-holer. They got it up and running 50 years ago for about $80,000. Not in the pristine condition of some of the other courses on the Trail, Maple Creek is still a fun public layout with a friendly staff. It’s a must-visit for Dye enthusiasts.

In a perfect world you should also end the Dye Trail at the Pete Dye Course at French Lick, a most difficult layout in very rural Southern Indiana. French Lick, once the home of basketball legend Larry Bird, was a retreat for the rich and famous before serious economic issues decimated the little town. It’s revival is a heartwarming story in itself, and the Dye Course is a big reason for the progress that’s been made.

The Dye Course at French Lick opened in 2009 and has already hosted the U.S. Professionals National Championship. It will take the collegiate spotlight the next three years as the site of the men’s Big Ten Championship. While the men are playing the Dye Course the Big Ten women’s teams will compete for their conference title on the nearby Donald Ross Course.

In between the creation of Heather HIlls/Maple Creek and the Pete Dye Course at French Lick there were plenty of other courses of all degrees of difficulty. The five others on the Trail demonstrate the wide variety of ways Dye has found to make golf interesting and challenging.

Dye has expressed sentimental affection for the Kampen Course at Birck Boilermaker Golf Complex at Purdue University in West Lafayette. He helped raise the money to build it in 1997 and Purdue’s agronomy students use it as part of their studies. That course is popular with more than Purdue’s students. In September, 2012, it was ranked the No. 3 course in all of collegiate golf by PGA.com.

The Plum Creek Country Club in Carmel is an upscale public layout that Dye created with fellow architect Tim Liddy in 1997. It was a busy place on the day I visited, the first round of my five-in-a-row tour. (I had played the Kampen Course and the Pete Dye Course at French Lick on previous golf trips).

Most unique of the courses on the Trail is Brickyard Crossing, which has four of its holes inside the Indianapolis Motor Speedway. Golf was played on this land before Dye was involved, but he created a special place in 1993. On my visit the engines of the race cars provided the background music to a round that’ll be hard to forget. I’d played the Brickyard in an informal outing organized by Dye shortly before the course opened, but I was looking forward to the return visit and it didn’t disappoint.

Best course on the Trail from my viewpoint was The Fort, part of a resort built on Fort Benjamin Harrison in Indianapolis. It offered something for everybody.

Unfortunately, I can’t say I played the whole Pete Dye Golf Trail — yet. I still haven’t made it to Mystic Hills in Culver. But that trip will be made in the not-too-distant future, I assure you.

During my five-day tour I also played Crooked Stick, the 2012 site of the BMW Championship. It’s one of Dye’s best-known courses and in close proximity to four of the layouts included on the Trail. Crooked Stick, a private club that has proven itself as a big-time tournament venue, isn’t one of the Trail courses but hopefully it can be tied into the project in some way down the road.