WINTER PARK, FLORIDA – A big reason for scheduling a round at Winter Pines Golf Club is that it is – at least arguably – the busiest course in Florida. Given the reported 1,500-plus courses in the Sunshine State – and particularly the array of good ones in the Orlando area – that’s saying something.

Determining the busiest course anywhere is difficult, since the number of rounds played is self reported. It’s hard to imagine any U.S. course, for instance, getting more rounds than Rancho Park – the city-owned Los Angeles hotbed that is blessed with consistently better weather year-around than any course in Florida.

Winter Pines is right up there in popularity, though. In 1992 it had a reported a high of 90,000 rounds. That’s about 300 players a day. That number dropped off to about 75,000 rounds in 2002 but general manager Steve Singh says the course still averages about 65,000 per year despite the economic struggles that have affected the golf industry nation-wide.


I’ve played Rancho Park, once the site of the PGA Tour’s Los Angeles Open and the U.S. Golf Association’s U.S. Senior Open among other big events. It’s still a championship-style course and still busy. Winter Pines is much different.

The course is short, but not a par-3 or executive-length layout. It plays at 5,401 yards from the tips and is a par-67. When building began in 1964 the architect, C.A. McCalister, plotted a par-62 course for the five original owners of a course then temporarily called Golfside Country Club.

The course opened in 1968 and was expanded in 1977. Five holes were lengthened by Bud Timbrook, a golf professional who was part of the original ownership group, and Gardner Dickinson, the veteran PGA Tour player.

Ed McMillin, whose family owns a pie factory in Erie, Pa., bought the course in 1980. About to turn 90, McMillin had the right idea from the start, offering players a good product at a fair price. That policy continued when McMillin’s son Jon served as the club’s general manager. Jon is now the club president. Singh started working at Winter Pines 13 years ago when he washed carts as an 18-year old and worked his way up to the GM position.

“Winter Pines is my family, and I’m very lucky to be part of the company,’’ Singh says. He’s not alone in feeling that way. Joe Ondo, the superintendent, arrived in 1979 and hasn’t left. He plans to retire in August after 37 years on the job.

The Winter Pines leadership has the right idea. It draws big numbers of players year-around — not just during the heart of the tourist season –for a variety of reasons. 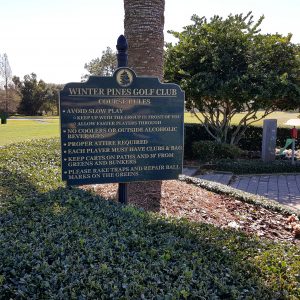 You can’t beat the price (currently a high of $25 on the weekends, cart included), but the popularity of Winter Pines isn’t just based on cost. The course conditioning is good throughout. The practice area is more than ample. For those who prefer walking, the course is great for that. There are programs offered for juniors and an event calendar for all types of older players as well. The clubhouse had a cheerful atmosphere and the staff was friendly when we visited.

Located across the street from the Orlando city limits, Winter Pines felt like just what it is – a nice neighborhood golf course. Winter Park Pines is the subdivision in which the course is located, and it’s only about 15 minutes from the downtown area.

As for the course, its most striking architectural feature is the stream that meanders through most all the holes. It serves as a hazard in spots and a visual enhancement in others. Players, though, will probably find the four consecutive par-3 holes on the back nine the most memorable aspect. The layouts has two par-5s, the longer of which is 480 yards. The seven par-3s range from 85 yards (front tee at No. 8) to 224 (back tee at No. 12).

There are no par-5s on the back side, and that may be a big plus in attracting new players. Shorter holes do facilitate lower scores and lower scores are encouraging for any player. Winter Pines won’t beat you up, that’s for sure, and showing a greatly improve score on the back nine is incentive to come back for more.