POLAND, Maine – We’re always looking for unusual golf experiences, and this time we found one in Poland.

Poland, Maine, that is.

Chances are you won’t think of Maine when you’re talking golf. It’s nothing new at Poland Spring Resort, however. Golf has been played there since 1896. For the last 10 years it’s hosted one of the most enticing golf packages that we’ve come across.

The state of Maine has only about 140 courses, most of them public and many of those nine-holers. Still, Maine has its place in American golf history thanks to the Poland Spring Resort. It is — by most accounts — the oldest resort golf course in the country. The resort has only one Donald Ross course, but there was golf there before Donald Ross arrived.

“We start with Arthur Fenn,’’ said Cyndi Robbins, a remarkable woman who started working at Poland Spring 45 years ago as a waitress and is now the resort’s owner. “He’s an important part of our history.’’


Cyndi married Mel Robbins, who took over the ownership of the resort in the 1970s after they were married. When Mel passed away 11 years ago Cyndi opted to keep this historic place going and she’s done an admirable job of that.

The town may be best known for the mineral water that has long been produced there, but Robbins makes a strong case for recognizing the importance of golf and Fenn as well. Fenn designed the first course on the property, a nine-holer, in 1896.

A top player himself, Fenn attracted many other top golfers to the resort in the early 1900s. Most notable were Harry Vardon, the famous professional from England, and Scotsman Willie Anderson, the only golfer to win three straight U.S. Opens. Most of the golf professionals of that era were from England or Scotland.

Poland Spring historians consider Fenn the “first American-born golf professional and course designer.’’ He played with the best golfers of his era, too, but isn’t as famous as the Vardons or Andersons because he didn’t stray much from Poland Spring to compete in the big national tournaments.

Fenn’s daughter Bessie also was part of the operation, and she is considered the “first woman golf professional in charge of a club.’’


The resort goes much further back than the Fenns. An inn has operated continuously on the property since 1797. It was called the Wentworth Ricker Inn then, and the Ricker family owned the resort for almost 150 years.

“The Rickers hired Fenn because they wanted to be involved in golf,’’ said Cyndi Robbins, noting that subsequent owners all felt the same way. “We still get people coming just because of our golf course. Some who never played our course have come just because of Donald Ross.’’

The legendary Ross was hired by the Rickers to convert Fenn’s nine-holer into 18 holes. Ross started work in 1913 and finished the job in 1915, and the course hasn’t undergone any major changes since then. The course measured 6,380 yards when it opened and is a 6,178-yard par-71 from the back tees that’s called The Links at Poland Spring now.

“In World War II some of his features were let go,’’ said Cyndi Robbins. “We’ve worked to restore what we can.’’

The Maine Golf Hall of Fame is also housed on the property, which features the Maine Inn – a Colonial-style building with a huge porch and stately white pillars. It’s the center for a wide variety of activities offered at the resort. Poland Spring, though, still has just the one golf course.

Many resorts have multiple courses these days, and – rather than build more of courses at the expense of the resort’s other entertainment offerings – Robbins opted to start the Maine Golf Trifecta.

She invited the owners of two nearby privately-owned public courses – Spring Meadows at Cole Farms, in the town of Gray, and Fox Ridge, in Auburn – to join forces on a golf package. Neither Spring Meadows nor Fox Ridge offers lodging so package participants stay at Poland Spring.


Spring Meadows and Fox Ridge are much newer courses, and the mix of layouts offered to those joining the Trifecta covers all levels of players. Poland Spring’s course is short, flat and historic. Spring Meadows is the most fun with stunning elevation changes. Fox Ridge has some similar features but is a tougher challenge. The most skilled players will like it the best.

The Maine Trifecta has been in effect for 10 years and benefitted all three facilities. For $319 participants can play all three courses, receive two nights of lodging at Poland Spring and four all-you-can-eat buffet meals. With upgraded accommodations the price goes up to $349.

“It’s been 10 years in the making and we have something very unique,’’ said David Pollard, co-owner and manager of Spring Meadows. “We are 15 minutes apart and the owners have come together. That’s unheard of. We’re very proud of what we’ve done.’’

Spring Meadows, celebrating its 20th anniversary, is a family-owned operation and Pollard’s brother Brad owns a restaurant across the street from the course. Robbins also has a restaurant, Cyndi’s Dockside, that is separate from the resort. 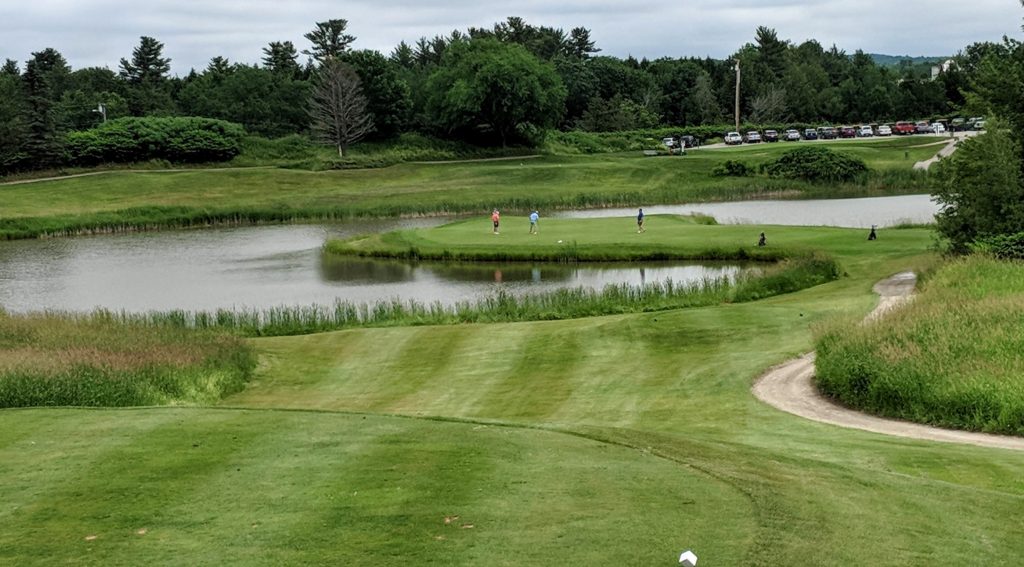