GREENVILLE, Ala. – Some things are just meant to be. That seemed to be the case when a chance to play on Alabama’s Robert Trent Jones Golf Trail finally materialized at the end of a 10-week road trip.

This travel-writing journey was to finish up with rounds at Sandestin, on the Florida Panhandle, and Preserve, a Jerry Pate creation in Biloxi, Miss. Alabama had been on the route back to Chicago two previous times on similar trips, but not on this one.

Then Mother Nature intervened. Two days of rain in Destin, FL., and similar conditions — with more severe weather in the forecast at both Destin and Biloxi required a change in travel plans. Rather than go home via Mississippi we journeyed through Alabama. No more golf was planned — at least not initially.

A casual lunch conversation with a local at a Cracker Barrel in this small town revealed a Robert Trent Jones Trail course just a few miles away. The rain had stopped, so we thought a visit was in order. The course was relatively empty, and the price was right. So, why not play?

This was the 21st and last 18-hole round of the trip. It came on, by far, the best course we played on our journey and it also had the lowest greens fee. Go figure. There has to be a message there some place.

The Jones Trail has been in existence for 20 years (the first course opened in 1992). It’s created a boon to Alabama’s economy with its 26 course spread over 11 sites. In fact, The Trail Guide points out, golf is a $1.5 billion industry in Alabama. That’s more than Auburn and Alabama football and basketball revenues combined, and most of it’s due to the Jones Trail. On Oct. 23, 2013, the Trail welcomed its 10 millionth visitor. 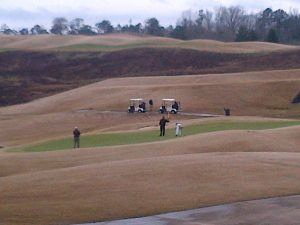 All 11 sites are universally regarded as good, but we apparently lucked out in showing up at Cambrian Ridge – a 27-hole facility with an additional nine-hole short course about 40 miles south from the state capitol of Montgomery. It was filled with great, expansive views, one of which is shown here.

According to The Trail Guide Cambrian’s Sherling nine “may be the best on the entire Trail.’’ The Canyon, carved out of former hunting grounds, was the other nine we played. It was our first nine and we weren’t ready for its first hole – a long par-4 that drops 200 feet from the tee to the fairway.

The Wow! Factor was similarly prevalent throughout round but never more than at the finishing holes for both nines. No. 9 on the Sherling and No. 9 on the Canyon share the same wide three-level green. The tee shots of both are impacted by a huge, deep ravine between the fairways (see photo, below). The challenge is especially pronounced on the Sherling. Try to bite off too much yardage and you either lose a ball or take a precarious downhill walk in an effort to find it. 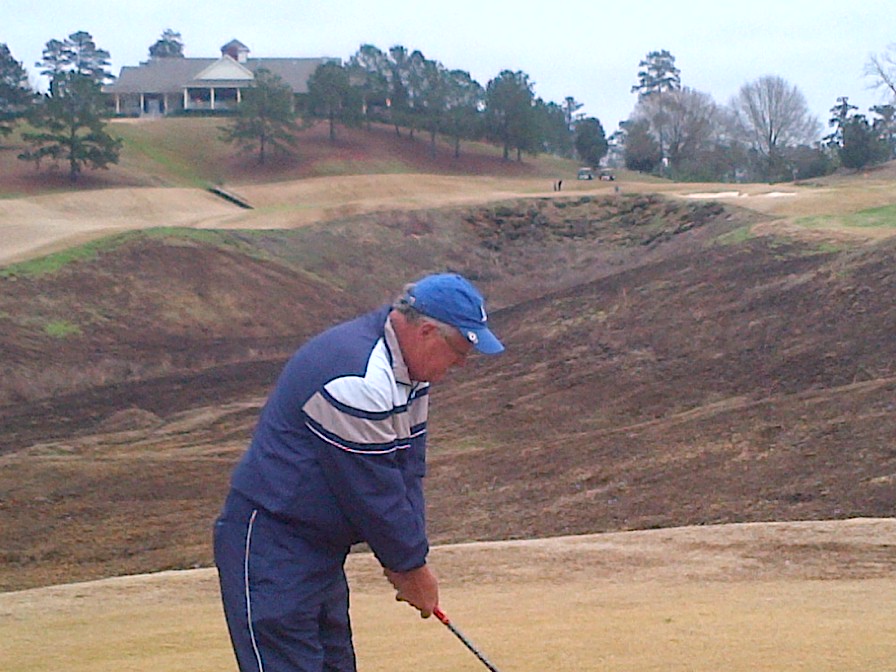 Unfortunately this one spur-of-the-moment round represents my only first-hand knowledge of the Jones Trail courses – at least for now. Believe me, hitting a few of the others on subsequent trips is a must. Golf Magazine has called the Jones Trail the best buy in golf, and I’m not in a position to dispute that.

The pictures shown here are from a February round, when the weather is obviously not ideal. Still, the beauty of shots over water (show here) is evident. 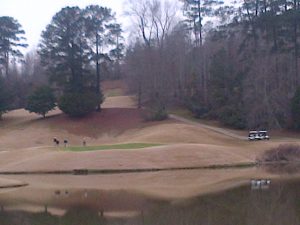 The Jones Trail was conceived by David G. Bronner, chief executive office of Retirement Systems of Alabama. The first Trail course designed by Jones and his design associate, Roger Rulewich, was Oxmoor Valley near Birmingham. The plan was to build eight courses at the roughly the same time. It seemed a dubious possibility then, but obviously the plan worked and the Trail outgrew its original plan.

A few other states have attempted to build trails around the works of famous course architects, the most recent being Indiana with its Pete Dye Golf Trail. None have taken off yet like Alabama’s Jones Trail.

Alabama has 252 courses, but the Jones layouts are special. The Trail consists of 468 holes. Every one of the 27-, 36- or 54-hole facilities have back-to-nature settings and are challenging. Though we’ve steered away from mentioning greens fees in these reports because they’re constantly changing, The Trail Guide declared that “most tee times (are) priced between $46 and $81 year-around.’’

Ross Bridge, in Hoover, is the newest course on the Trail and – according to Tour veterans – the best of the offerings. It hosts the Regions Charity Classic on the Champions Tour.

Silver Lakes, in Anniston, was devastated by a tornado in April 2011. It re-opened five months later with a new look. It has spectacular views of the Appalachian Foothills and its ultra dwarf putting surfaces are – again according to The Trail Guide — “arguably the best on the Trail.’’ No. 7, 8 and 9 on its Heartbreaker nine also may be the Trail’s best finishing stretch.

Anyway, each facility – many of them tied into Marriott or Renaissance resorts – has been positively recognized by various industry publications at one time or another and has its own story to tell. All, I’m sure, are worth telling.