GALENA, Illinois – Illinois’ premier golf resort turns 40 in October and the months leading into that milestone have not been easy ones on the golf end. Weather-related issues haven’t been kind to Eagle Ridge Resort & Spa.

“We’ve been getting punished, for sure,’’ said director of golf Reagan Davis. “We’ve been getting five-six inches or rainfall at a time and had nine inches last weekend. Our biggest concern is the bunkers. It’s been a little scary because they’re not designed to handle that much rain.’’

Still, Eagle Ridge has carried on and two of the biggest events of the year are coming up quickly. The Midwest Regional Classic will have 36 college teams competing this weekend before the Illinois PGA Players Championship comes to town Sept. 24-25 for the last of the Illinois Section’s four major annual competitions.


Both will be on the North Course, oldest of the three 18-holers on the property. The North opened in 1977, a year before the resort’s official opening — when the Eagle Ridge Inn started accommodating visitors. The South opened in 1984, the nine-hole East layout in 1991 and The General – the showcase layout – in 1997. All were designed by the late Roger Packard, with two-time U.S. Open champion Andy North pitching in on The General.

The General is one of the best layouts in the Midwest, with – for Illinois at least – its rare blend steep elevation changes. Still, when it comes to big tournaments, they most always go to the North Course. That has always puzzled me.

“Years back it was set up too tough for one tournament and others have shied away from it ever since,’’ said Davis. “It’s tough to walk, but I don’t think it’s any harder than the North. It’s (the various tournament organizers’) choice.’’

In bypassing The General, the most serious tournament players don’t get to take on the most memorable tee shot in all of Illinois golf. No. 14, a downhill par-4, has a 180-foot elevation change from the tee box to the fairway. It’s an awesome view, as parts of Illinois, Wisconsin and Iowa can be seen from the tee markers. 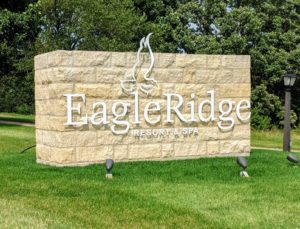 Anyway, this week’s collegiate event will raise money for local youth golf programs – the latest in the Touchstone Golf Foundation’s community outreach efforts. Four area high schools plus Loras College in nearby Dubuque, Iowa, use Eagle Ridge as their home base.

The Illinois PGA Players Championship, scheduled a week earlier this year than in previous years, will feature about 100 club professionals finishing up their bids for Player of the Year points. That event annually produces plenty of drama.

Indeed the resort’s 40th anniversary is a well-deserved cause to celebrate. The resort underwent a change in ownership and management in 2013. Davis and Colin Sanderson, the director of sales and marketing, arrived then and, in the last five years, that new leadership has accomplished a lot.

This year an extensive three-year project to renovate all 60 guest rooms in the courtyard area of the Eagle Ridge Inn was completed while the golf upgrading continued.

“The courses continue to get better every year, and we want to get them back to their original playing condition,’’ said Sanderson. And that’s not all.

New golf carts as well as a golf simulator were also added resort’s amenities this year.