GULF SHORES, Alabama – First off, let’s make this perfectly clear.  Gulf Shores-Orange Beach – a  community sandwiched between Pensacola, FL., and Mobile, AL., and not far from the Mississippi state line – offers a lot more than golf.

But we will get to those other nice things later. Gulf Shores is a unique spot for golfers. Not only are its courses good, but they’re also not far from each other. The Gulf Coast and Orange Beach Vacation Guide lists 15 courses in the area with three of the best especially close together.

“We’ve got an island that is 32 miles long in Gulf Shores and Orange Beach,’’ said Easton Colvin, public relations coordinator for Gulf Shores-Orange Beach Tourism. “In it there’s 32 miles of pretty, white sand beaches and 20 miles of golf, if you add the yardages of the courses there together.  All of our courses are public.  You can schedule a tee time on your own at every one of them.’’ We also learned that full-service golf packages can be booked by a division of Troon, which owns three of the course, called Coastal Alabama Golf.

The three courses on the island part of Gulf Shores form a tasty trio.

Kiva Dunes has earned the most accolades.  It’s a links-style layout 200 yards off the beaches. Jerry Pate, working with good friend and developer Jim Edgemon, designed it.

Pate was a hot commodity as a player before Kiva opened in 1995. He starred for the University of Alabama golf team, winning the U.S. Amateur in 1974. His pro career started with a bang, too.  In 1976,  his rookie season on the PGA Tour, he won both the U.S. and Canadian Opens. Six years later he won The Players Championship.

Those are pretty good titles to have on a playing resume, and Pate won five other times before shoulder and knee problems slowed his playing career down. With Kiva one of his first designs Pate converted to being a successful course designer, developer and businessman while settling in Pensacola.

In its early years Kiva hosted the second stage of the PGA Tour Qualifying School three times and was named the No. 1 public course in Alabama in 2017. Located on the Fort Morgan peninsula the facility has condominiums and beach houses to rent, plus four swimming pools, two on-site restaurants and over a mile of waterfront.

Kiva has gained recognition far beyond its home state, and it’s our choice as Gulf Shores’ best – but not by all that much. Peninsula Golf & Racquet Club is pretty darn good, too.

This facility also opened in 1995, with Earl Stone designing its 27 holes on 800 acres.  Peninsula has some things that Kiva Dunes doesn’t have.  It has three nines – the Lakes, Cypress and Marsh – and the facility also has an 8,000 square foot fitness center, eight tennis courts and indoor and outdoor swimming pools.

Third of the island courses is Gulf Shores Golf Club, the oldest course at the destination.  It was built by the father-son team of Jay and Carter Moorish in the early 1960s and they also handled a fullscale renovation there in 2005. The course was hit by Hurricane Sally in 2020 and is still somewhat in recovery mode but its sharp doglegs and numerous water hazards make for a challenging test.

Biggest of the Gulf Shores facilities isn’t on the island but is just five minutes up the road.  Craft Farms has 45 holes with its Cotton Creek and Cypress courses and a nine-hole par-3 layout.  Those two 18-holers comprise the only Arnold Palmer designs in Alabama.

The legendary Palmer was just starting to dabble in course design when he developed a close friendship with Robert Craft.  They worked together for the 1987 opening of Cotton Creek and the 1993 debut of the Cypress course.  Craft passed away in 2006.  His son has been the mayor of Gulf Shores since 2008.

Though some seasons are better than others weather-wise, there’s pride in what Gulf Shores has to offer golfers.

“Gulf Shores in November is as good a place to play golf as you’ll find anywhere,’’ said Dan Dorrough, now the head superintendent at Gulf Shores Golf Club after stints as an assistant at Kiva Dunes and Craft Farms.

We made our first trip to Gulf Shores in 2012 and played the same four courses as we did on this visit. The Gulf Shores community looked a lot different this time, though. Now there’s more, new, or at least expanded, attractions.

For starters there’s Gulf Shores State Park with its 6,150 acres creating a haven for hikers, cyclists and Segway tours. The Hugh S. Branyon Backcountry Trail spans all of the park’s 28 miles and connects both Gulf Shores and Orange Beach to the park. There’s also a nature center, over two miles of uninterrupted pristine beachfront and a lodge (actually a 350-room Hilton hotel that was rebuilt in 2018) featuring the Perch Restaurant.

Our favorite dinner spot was Big Fish, a great place featuring seafood and a sushi bar but steak, pasta and sandwiches are available, too.  Lucy Buffett’s LuLu’s, located on the Intracoastal Waterway, also has good food along with live music, a fun arcade, a three-story climbing ropes course and children’s activities. The owner is the sister of one of my all-time favorite singers, Jimmy Buffett.

Sassy Bass Cookout Tiki Bar has a somewhat hidden location between Kiva Dunes and Peninsula but the food, served in hot iron skillets, was delicious in addition to having a unique presentation.

And then there’s the sprawling Flora-Bama Yacht Club with its world famous Flora-Bama Lounge, Package & Oyster Bar. It offers open-air waterfront dining and a lot more. This is a legendary place near Orange Beach that appeals to all ages with its music, interesting decor and numerous bars.  Though it was hit by many hurricanes over the years, Flora-Bama remains a must visit no matter the duration of your stop in Gulf Shores-Orange Beach area.

You don’t have to just play golf and eat in Gulf Shores, either.  On rainy days you can still play miniature golf indoors – at the glow-in-the-dark Jurassic dinosaur adventure. It has a unique 5,000 square foot prehistoric setting and was a nice diversion for even the most serious golfers in our group. Most all of them, however,  preferred the Sail Wild Hearts’  relaxing two-hour sunset cruise in a 53-foot open-ocean catamaran. For more information visit gulfshores.com. 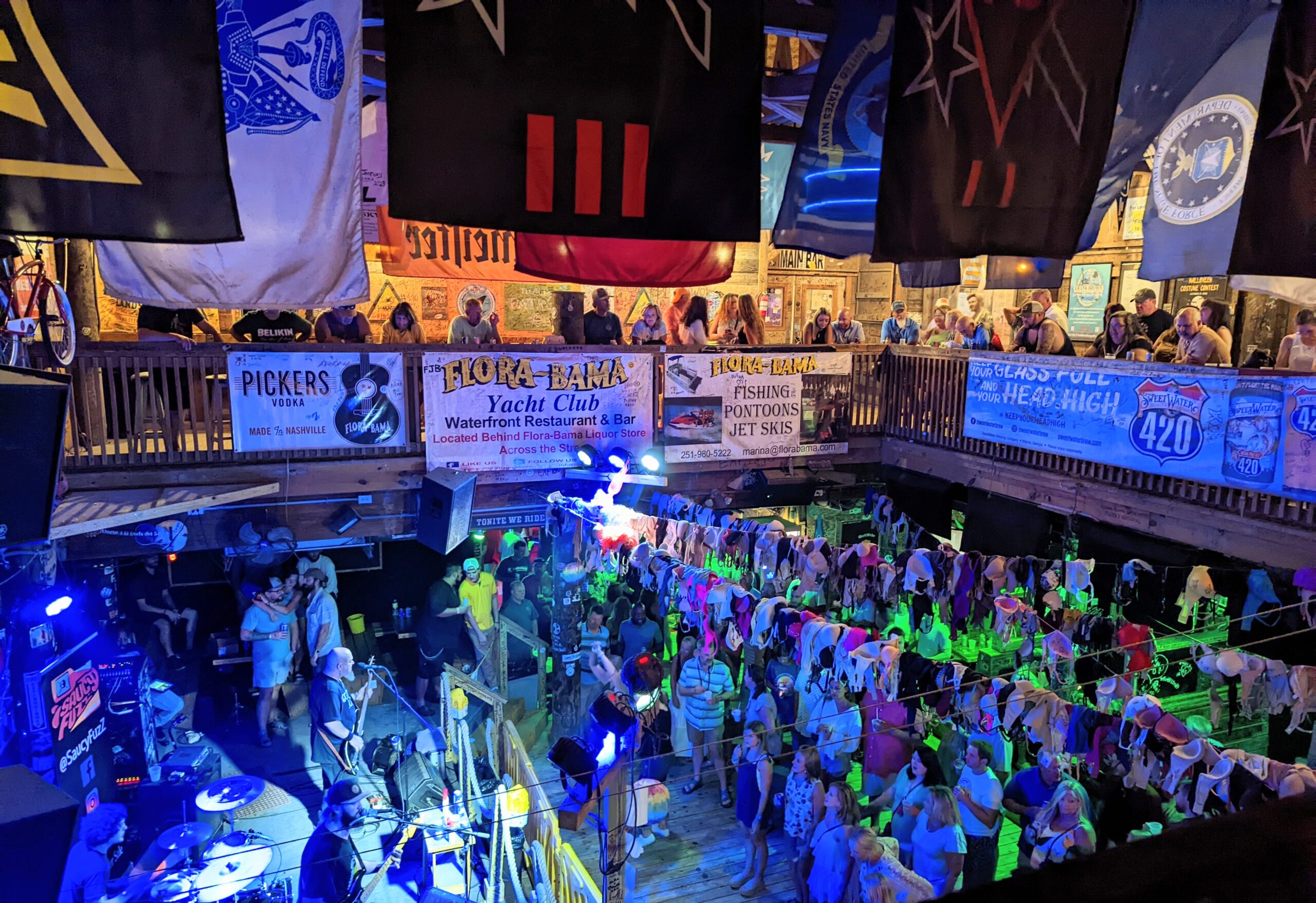