FRENCH LICK, Ind. – The final round of the LPGA Legends Championship was impacted by weather for the second straight year Sunday, and this time it prevented a ball from being struck.

Anticipating weather problems, Legends officials scheduled a 7:30 a.m. start of play off both the Nos. 1 and 10 tees, but a night of rain left the course too wet for play to begin on Sunday morning. Consideration was given to starting play five hours later, perhaps in a shotgun format, but the rain became stronger and fog made visibility difficult. A car accident on the road leading in to the course also was a factor in the decision to shorten the tournament to 36 holes.

That meant that Laurie Rinker, the leader after Saturday’s second round, was declared the champion and the winner of the $60,000 first-place check. She accepted the trophy to a standing ovation in the Dye Course pavilion and had words of wisdom for her brother Lee, a golf professional who will be playing in the Senior PGA Championship on the course next May.

“I texted my brother a picture of the trophy because he’ll be here next year,’’ said Rinker. “Maybe I can give him a tip or two.’’

She might also advise Lee to hire her caddie. Caleb Powers, a local bag-toter who was on her bag for both her tournaments on the Dye Course (they’re pictured together, below).

“He’s the best,’’ said Rinker. “He knows the course better than anybody. He told me where to hit it, and this week I could do it. French Lick’s a very special place. I’ve told people how beautiful it is, and the course is in fabulous shape.’’ 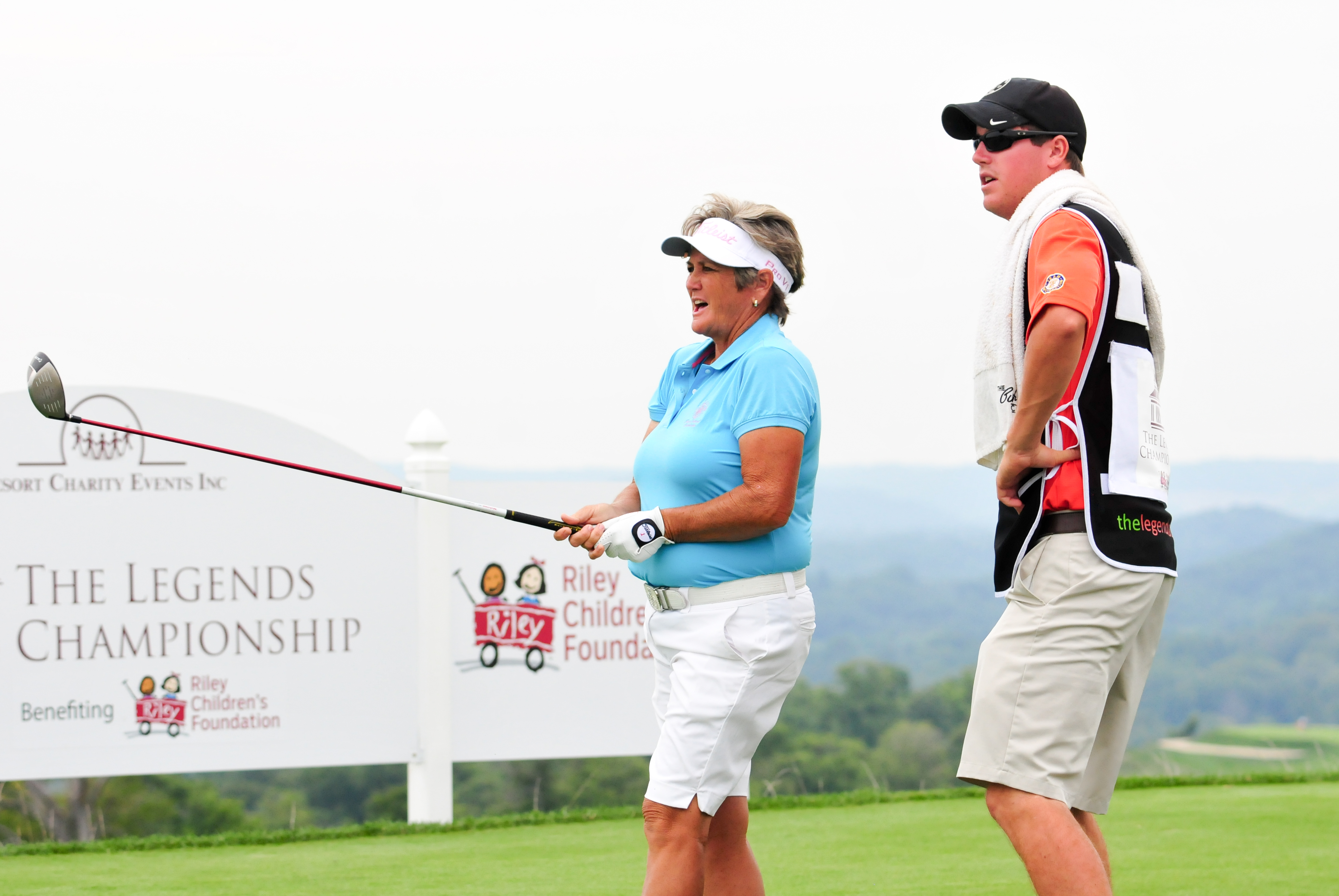 Rinker, from Stuart, Fla., was joint runner-up in the first LPGA Legends Championship when Canadian Lorie Kane won the title. Kane had a two-stroke margin after the final round of 2013 was played in cold, rainy weather. She finished in a tie for 17th in her title defense after rounds of 75 and 73.

Sherri Steinhauer was within one stroke of Rinker after 36 holes thanks to a blistering 9-under-par 63 on Saturday. Steinhauer’s round is believed to be the lowest in the Legends’ 14-year history, two better than the 65 Kane shot in the Wendy’s Charity Challenge in 2011. Steinhauer’s runner-up check was for $36,969.


Rosie Jones, winner of the Wendy’s Charity Classic in Michigan last Sunday, wound up third after Sunday’s round was cancelled. She was two strokes behind Steinhauer and earned $27,720. The tourney purse was $500,000, the highest on the Legends Tour.

Rinker, who shot 66 in the second round, posted a winning total of 7-under-par 137. It was her third win on the Legends circuit, the others coming in the BJ Charities Pro-Am in 2012 and the Legends Tour Open in 2013.

Rinker’s wins as an LPGA regular came at the Boston Five Classic in 1984 and the Corning (N.Y.) Classic in 1986. She also won the Bridgestone Ladies Open in Japan in 1984 and had three runner-up finishes on the LPGA circuit in 1987. Her brothers, Lee and Larry, are also golf professionals and Laurie teamed with Larry to win the JC Penney Classic in 1985.

Sunday’s cancellation also meant the six-player Super Seniors event was cut from 36 to 18 holes. It ended in a three-way tie for the title based on the 77s shot by Shelley Hamlin, Jane Blalock and Judy Dickinson on Saturday. Each pocketed $750. Blalock, CEO of the Legends Tour, also was inducted into the Legends Hall of Fame as part of the pre-tournament festivities.