The Daily Herald joined forces with the staff of the Cantigny Golf Academy in Wheaton to celebrate the start of another Chicago golf season.

Following introductions by Eileen Brown, the Herald’s director of Innovation and Audience Development, over 80 Daily Herald Total Access subscribers received a tour of the Academy from head professional Patrick Lynch and listened to a preview of the Chicago season presented by golf writers Mike Spellman and Len Ziehm and moderated by sports editor Tom Quinlan.

The March 25 event served as a lead-in to the third year of Ziehm’s weekly columns in the Herald, the first of which runs on April 3.

In addition to the presentations by Lynch, Spellman and Ziehm the golf fans tested their skills at Cantigny’s 10 indoor hitting bays, visited its video swing analysis and club-fitting studios and were given advice on golf-specific fitness training.

Cantigny plans to open its courses on April 5, weather permitting.

Here are some scenes from the kickoff event. 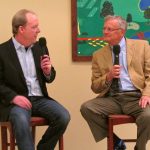 Mike Spellman and I were ready to give our thoughts, not only on last year’s Ryder Cup but also on what’s ahead for Chicago golfers in 2013. 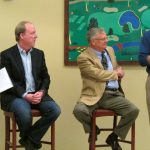 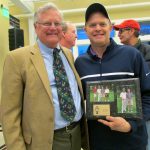 Gene Beck, my partner in a Make-A-Wish Foundation outing at Cantigny in 1995, surprised me by bringing a memento from that event. 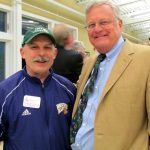 One visitor was good friend Connie Kowal, the director of the sprawling LIbertyville Sports Complex, which includes a golf practice range and nine-hole par-3 course. 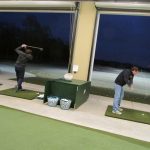 Golfers can spend and event hitting from inside into the outdoor range at Cantigny’s state-of-the-art Academy.